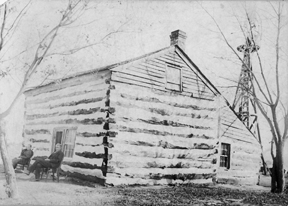 ANDREW KINNEY was one of the early pioneers of Fitchburg, arrived in 1844, and founded a large community of Irish settlers around what is today the Irish Lane area.  Andrew Kinney was born in 1805 in County Mayo, Ireland.  The name was originally spelled “Kenny” until about 1855, when the family began spelling the name “Kinney.”  Andrew and an older brother Michael (born 1798 and named after their father, Michael) left the family home in Newcastle, County Mayo, in the spring of 1831.  Andrew, Michael, and Michael’s family moved to a farm near Trois Rivieres, Canada.  The brothers’ parents eventually left Ireland and joined them at the Trois Rivieres farm, and later passed away there.

From Andrew’s 1831 arrival in Trois Rivieres, he lived at that farm and other locations in Canada and northeastern United States over the next thirteen years.  Andrew had a canal contracting business that expanded along the East Coast from Canada down to South Carolina.  He is also remembered for having worked on Erie Canal expansion projects in New York.

Andrew met Lucretia Jane Clark in Trois Rivieres and married her on March 23, 1834 in Salisbury, Connecticut.  Lucretia Jane Clark was a seventh generation descendant of the Clark family of Milford, Connecticut.  The Clark family was founded by an Englishman, Deacon George Clark, in 1639, just nineteen years after the Pilgrims arrived on the East Coast.  George Clark’s home was reconstructed in 1780, and is a museum for the Milford Historical Society today.  Lucretia Jane’s grandfather Elisha Clark fought in the American Revolutionary War under the command of General George Washington.  Lucretia Jane’s parents were Elisha and Jane Baldwin Clark, who later lived in Sheffield, Massachusetts.  Lucretia Jane was born on February 18, 1802, and later became known as Mary Jane when she converted to Catholicism.

In May 1844, Andrew entered the United States at Lewiston, New York, just north of Niagara Falls, to become a citizen.  When Andrew and his family reached Wisconsin soon thereafter in 1844, they settled on gently rolling land south of Syene Prairie in the heart of the wilderness that would become “Fitchburg.”  All of the land in central Fitchburg in 1844 was uninhabited wilderness.  Soon, a road (later known as Irish Lane) developed in front of the Kinneys’ homestead.  A large settlement of Irish pioneers then formed in the surrounding area in the late 1840s and 1850s, and was one of the three settlement areas of Irish in Fitchburg in the 1800s.

Andrew’s homestead was southeast of the modern-day intersection of Caine Road and Irish Lane.  Andrew’s brother Michael in 1845 brought his family from Trois Rivieres to Irish Lane and had a farm adjacent to Andrew’s – on the west side of Caine Road.  Together, their two farms totaled 200 acres by 1849, and their primary cash crop was wheat.

Immigrants fleeing the Great Potato Famine in Ireland began arriving in the late 1840s and early 1850s.  Andrew was knowledgeable in stone masonry, so he supervised the laying of foundations for neighbors’ log cabins and barns.  Also, he continued his contracting business – now around southern Wisconsin.

Andrew and Mary Jane were leaders in the religious development of southern Dane County.  After their arrival in 1844, Andrew began bringing Catholic priests from Madison to say Mass at the Kinney log cabin since there was no Catholic church in the southern Dane County wilderness.  The Kinneys’ efforts, along with a Fox family’s, contributed to the later founding of St. Mary’s Church on Highway M in Fitchburg – the parish of which is now Holy Mother of Consolation Church in the nearby Village of Oregon.

In 1847, at the first meeting to elect people to govern the town that was to become Fitchburg, Andrew was elected a fence viewer, a person who mediated disputes over property lines.  His brother Michael was elected town treasurer in 1851.

Andrew Kinney died on September 6, 1855 on the Irish Lane farm, and his wife Mary Jane died of cancer a few months before his death.  Andrew and Mary Jane Kinney’s descendants continue to live on the original family property in Fitchburg today in the 21st Century.

By Thomas P. Kinney, author of: