Early Fitchburg was a rural community. As the land was cleared for farming one of the prominent crops was wheat. Besides a crop, most of the farmers had a “milch” cow or two for the use of their families. After years of continually growing wheat that depletes nutrients in the soil combined with the invasion of the cinch bug, wheat growing became unprofitable. Wisconsin farmers turned to dairy farming andmade Wisconsin the leading producer of dairy products in the country. Click here to view a video detailing Wisconsin’s change from a wheat to a dairy state. Click here to view the list of Fitchburg Dairy farmers in the 1940s and 50s. 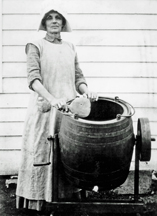 Many Fitchburg farm wives churned butter from the milk of their own herds. As herds grew commercial production of butter became necessary. Small creameries were started in various areas of the township to fill this need. One of the best-documented local creameries was Oak Hall Creamery Co. located near the present intersection of Fish Hatchery Road and County Highway M.  All the stores of this nineteenth century community have been torn down except the old creamery that was part of a house. 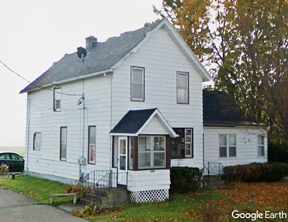 The main product of a creamery was butter or cheese. Most creameries were cooperative businesses with stockholder meetings held every year. The finished products were taken to stores in nearby communities to be sold. The proceeds were paid to the shareholders of the creamery. A document in the FHS archives covering the Oak Hall creamery shows the butter maker made a salary of $70 a month plus living quarters.

If a creamery specialized in cheese making the farmers took their fresh milk to the creamery and returned home with whey, which was the by-product left after the milk had been curdled and strained.  The whey was used to feed their hogs.

The creamery business evolved into small dairies that bottled unpasteurized (raw) milk which was sold to individual homes. Several such dairies had their start in Fitchburg. The two biggest and longest lasting were Bowman and Bancroft dairies. The Bowman Farm Dairy was started in 1914 by Charles Harlan Bowman and continued to expand through the years. It was finally sold in 1978 to Decker, Inc. who used the facilities to distribute juices.  For a history of the Bowman Farm Dairy click here.

Benjamin Bancroft owned the other major Fitchburg dairy.  Originally named Wood Bend Farm, the name was changed to Bancroft Brothers when his brother John joined the company and then to Bancroft Dairy when John left. After selling Bancroft Dairy, Benjamin started another dairy, Valley Springs Farm Dairy. For a history of the Bancroft dairies click here.

There are two other early Fitchburg dairies of note. In 1911, Quarry Hill Farm was owned by A. C. Griffin.  Before 1931, Robert C. Eby bought the farm and delivered milk to the Kennedy Dairy bottling plant in Madison. The other Fitchburg dairy was the McCoy Ice Cream Dairy. This dairy produced ice cream which it sold locally but most went to ice cream parlors in Madison. 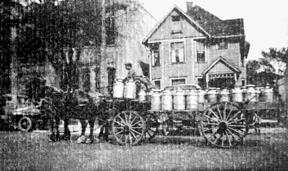 Through the years there were various ways of getting the farmers’ milk to the processors. The farmers took milk cans holding about 10 gallons or 80 pounds of milk to the creameries. These cans had been kept in their milk houses in tanks of cold water. An early photo shows Tom Jones driving a horse drawn wagon along University Avenue to Kennedy Dairy in Madison. That creamery was located south of University Avenue, north of Regent Street, between Park Street and Mills Street. 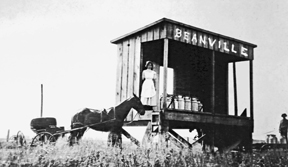 Some farmers were able to send their milk to processors by train. Both the Illinois Central line running along the west side of Fitchburg and the Chicago North Western along Syene Road were able to take the cans of milk to creameries. We think the milk from the Beanville milk stop was sent to a creamery or cheese factory in Belleville. It could possibly have been sent to Kennedy Dairy in Madison. As time went on small owner-owned trucking companies picked up the cans and delivered them to the local dairies. The empty cans were returned to the farmers to use the following day. Several of the truckers serving Fitchburg were Clarence Rockwell, Sr., O’Brien Brothers, Ed Jones, and Phil Barry. As more automated methods of dairying came into play the milk was stored in cooled tanks in a milk house and was picked up by large tank trucks. 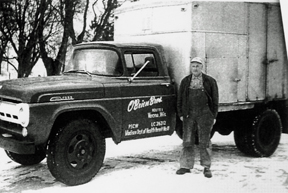 Milking at the farms was done twice a day, morning chores and evening chores. It was very important to keep the “milk dishes” clean.  That meant scrubbing out the 10 gallon cans meticulously when they were returned. The pails used when the cows were milked by hand were also scrubbed.  The strainers that were used to transfer the milk from the pails to the cans were next to be cleaned. When milking machines were installed in barns the lines and the cups were flushed and sanitized after the milking was finished. Then the “tools of the trade” were ready for the next round of milking.  In the 1950s tank trucks were used to pick up the milk. Samples were taken from each farm to insure the quality of the milk before emptying the milk house tank into the bulk truck. The modern day milking parlors do all of these things but on a larger and more automated scale.