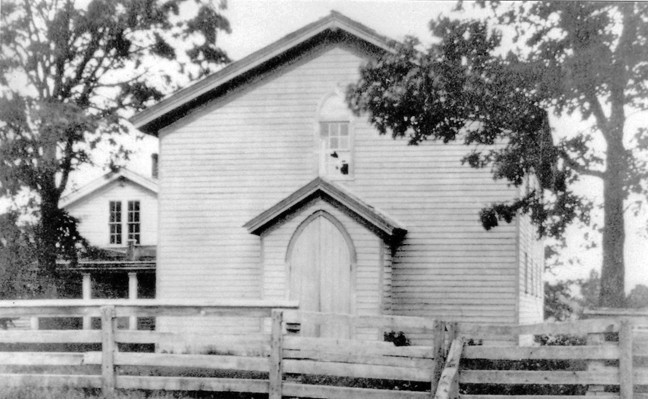 Fitchburg residents have been going to church for more than 170 years. Actually, in the earliest pioneer days, the church often came to them. Back then, Fitchburg was a sparsely populated township that was roughly two-thirds Protestant and nearly one-third Catholic. Catholics held the earliest remembered religious services in Fitchburg, beginning in 1844. Priests said Mass at George and Catherine Fox’s log cabin, which once stood on the south side of County M from where the stone gate posts to the Oak Hill Correctional Institution stand today. They also met the faithful at Andrew and Mary Jane Kinney’s log cabin, on what is now Irish Lane. Among these pioneer priests were Father Martin Kundig of Milwaukee; Bishop John Martin Henni of Milwaukee; Father Maximilian Gaertner of Sauk City; Father Francis Etschmann of Madison and Father Adelbert Inama of Roxbury. Pioneer families also attended services in Madison at what would become St. Raphael parish.

The first sermon in the Oak Hall area of Fitchburg was preached in the home of Robert Salisbury in 1845 by the Methodist circuit rider Rev. Hawks. A Methodist Church was built at Oak Hall in 1897, one-fourth mile south of the intersection of Fish Hatchery and M, on the west side of Fish Hatchery. The church was in existence for a short time and then merged with one in Oregon.

Rev. Matthew Fox arrived in Fitchburg in 1845 and conducted Presbyterian services in

homes and a log schoolhouse near the intersection of Highways MM and B at Lake View. Rev. Fox was one of the first Protestant ministers to preach in Wisconsin. He and his father, Wm. Maine Fox, helped establish many of the early Protestant churches in Dane County. In 1855, Hugh Cathcart gave a parcel of land on the NW corner of Irish Lane and MM to the Presbyterians for $1.00 – as long as it was used for church purposes. Rev. Matthew Fox built the Lake View Presbyterian Church there in about 1855. He was a great great uncle of Anna Fox. The church was well attended by Fitchburg and Dunn township families.

By 1856, much of the land in Fitchburg had been purchased from the government, and settlers were establishing farms in all parts of Fitchburg. That year, Barney and Ann McGlynn sold 2 acres of land on County M for $1 for construction of a Catholic church. St. Mary’s Church and rectory were completed in 1857 (see photo at top). Beyond the parsonage was a barn for the pastor’s horse and buggy, with the rest of the lot used as a cemetery. The church site was west of the gateposts of the present Oak Hill Correctional Institution. Parishioners came from the towns of Fitchburg, Dunn, Rutland and Oregon. The congregation outgrew its modest frame building, and moved in 1886 to a new church not far away in the village of Oregon. The old St. Mary’s Church building in Fitchburg was dismantled. A few gravestones of pioneers mark the site of the old church and graveyard today. The first burial in the St. Mary’s Cemetery in Oregon was in 1898.

In 1873, Fitchburg Presbyterians began attending services in Oregon. The Syene Methodist Society acquired their building and moved it to Highway MM and Lacy Road. The church became known as the Swan Creek Church, and it was used until about 1928.

Rev. E. F. Scherbel established St. Mark Lutheran Church in 1898. It was located near the south end of the old village of Fitchburg, on Wendt Road in southwestern Fitchburg. About 1925 it was sold to Wesley Wilson. The church was converted into a house that is still there.

From the 1930s to the 1950s, there were no known congregations of any denomination meeting in Fitchburg, undoubtedly because automobiles had become common, allowing people to travel to Madison, Oregon and Verona to worship. In the 1960s, the migration of congregations out of Fitchburg began to reverse, as congregations outgrew their buildings in Madison and families moved into suburban housing developments. New congregations also formed, new churches were built and nearly a dozen religious communities are active in Fitchburg today.

Religious Organizations in and near Fitchburg