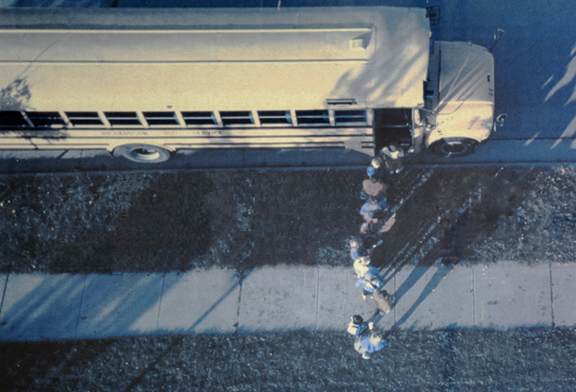 The following is an article written by Rich Eggleston on the controversy of busing middle and high school students from Fitchburg to Madison schools between 1972 and 1974.  An edited version of this article appeared in the Fitchburg Star.

As families in the Swan Creek neighborhood — and elsewhere in Fitchburg — ask themselves how to get the best possible education for their children, it might be useful to review the turbulent history that Fitchburg parents have had with the Madison school board.

Keep in mind the aphorism that if we don’t know history we are doomed to repeat it as you read about dealings between Fitchburg parents and the Madison school system from 1972 to 1974.

No more yellow school buses for them.

“Let them walk, hitch a ride, or ride Madison Metro,” was the school board’s final say (not in those words, of course), despite a state law that said school districts were able to opt out of Wisconsin’s mandatory busing requirement only for kids who lived in the city. Fitchburg, of course was a town in the 1970s.

Morrissette argued the children’s case to the school board, as did the late State Rep. Harland Everson (D-Edgerton).

“Rather than have a child get hit by a car for the sake of a few dollars, or a few pennies, we’d rather have a bona fide school bus,” Morrissette told Capital Times reporter Diane Sherman.

“Nobody has ever foreseen Metro buses rattling around in the rural areas,” Everson told Sherman. “It’s a good way for somebody to get killed.”

These 1970s style at-risk kids — James and Deborah Gaugert, Julie Morrissette and 75 other youngsters from the town — somehow got to school. But they did so at some expense to their parents and without the safety advantages of riding in a yellow bus with big flashing lights and a stop sign that swings out from its left side.

Getting to a bus stop would require some youngsters to walk more than a mile, concerned parents argued, and the town board called a special meeting to hear them out. Parents passed the hat, and took the school board to court. Attorney Jonathan D. Jackson Jr., who still lives in Fitchburg and has an office on Fish Hatchery Road, represented them.

But the Madison school board accepted the bad legal advice of Madison City Attorney Edwin Conrad, who called inclusion of parts of Fitchburg in the school district “functional annexation.” Them’s fightin’ words in Fitchburg.

There is no evidence in the Fitchburg Historical Society’s archives that the board ever considered the safety of children. This was a school board with a lot of familiar names: Ruth Doyle, wife of the late federal judge and mom of Wisconsin’s current governor; Robert DeZonia, Barbara Burkholder, Nancy Harper and Douglas Onsager being the most familiar to me.

The Fitchburg parents sought a court order. The school board resisted.

Maybe Assistant Madison City Attorney Gerald Kops and his boss’ attitude was a suburban bias. If Fitchburg youngsters were entitled to busing, the same might be true of kids in Maple Bluff or Shorewood Hills, Kops warned Circuit Judge William C. Sachtjen.

Sachtjen ruled that Fitchburg was part of the city for school purposes, and providing transportation for Fitchburg youngsters was an option, not a duty.

But the Fitchburg parents didn’t give up, and on May 7, 1974, the Wisconsin Supreme Court, in a decision by Justice Horace W. Wilkie, ruled that Sachtjen misunderstood the duty that the school busing law conferred on the Madison school district.

“The purpose of school transportation laws is to provide for the safety and welfare of school children,” Wilkie wrote. And that purpose should be liberally interpreted in the interest of the children, he added, saying “…the exception for children who ‘reside in cities’ should be confined to its common and approved usage.”

Heeding the continuing legal education provided by the Supreme Court, Sachtjen in August, 1974 ordered the Madison school board to reimburse Fitchburg parents $14,348 for the cost of transportation to school over a two-year period.

And Morrissette says today that the events of 1972 to 1974 are relevant, especially in assessing the Madison school board’s professed interest in building a school in Fitchburg.

“Don’t believe it for a minute,” Morrissette says. “They’re just playing the game. All they’re trying to do is appease the parents, especially the parents in the Swan Creek neighborhood.”