After spending a year working at H. W. Buckbee Seed Co., in Rockford, IL, John William Jung returned to his home town of Randolph in 1906 and set up a seed shop in an upstairs bedroom of his parent’s house plus some land to grow seeds. Business was slow but by 1909 it earned him enough money to buy a good printing press. With the press he printed 10,000 catalogs and wrote articles for farm magazines in exchange for advertising space. His business took off and in 1913 he moved his business to downtown Randolph to be near the post office and railroad. 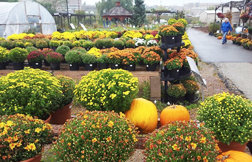 Although the depression was rough, William and his wife (the bookkeeper) survived and mailed up to 280,000 catalogs in 1935. The business was a family affair with John’s brothers helping and as John’s children got older, they joined the business too. John was as much a printer as a seedsman and continued to print his catalogues inhouse until 1987 when he reached 100 years of age.

John’s son John Wilfred, served as company bookkeeper and was instrumental in keeping the company at the forefront of the computer age.  His brother John Carl studied agronomy and horticulture at UW-Madison and introduced hybrid seeds into the Jung catalogs. When the company could not meet the growing demands, he established contracts with seed growers. In addition, he managed Jung Farms, Inc., a subsidiary of J. W. Jung Seed Co., that grew seeds such as corn, oats and alfalfa.

Son-in-law Tuenis Zondag was instrumental in establishing the Jung Garden Centers in 1955. In 1989 a second store was opened in Stevens Point, WI and three more stores were added in the Madison, WI area (including Fitchburg) in 1991. One store was closed after several years but an additional store in Sun Prairie, WI was added in 1993. The headquarters remains in Randolph, WI.