The building at 5253 Verona Rd is of interest from both an historical perspective as well as the home of an internationally recognized business. The farmhouse was built in 1860 by Henry Spencer who owned three fourths of the southeast corner of Section 6 in Fitchburg Township. Unlike other landowners in the area who built log houses, Spencer built a brick building defined as Gothic Revival with pointed arched window in gable architecture. The house has many large windows and unusually high ceilings betraying a southern architecture which must have presented a problem to keep warm in the Wisconsin winters.

With the start of the Civil War in 1861, the Spencer’s Southern origin and strong sympathies for the Confederacy created tensions with their neighbors and Union troops gathering at Camp Randall, part of which is now Camp Randall Stadium. Likely, at least in part to the strong antagonism of their neighbors, Spencer sold his farm to Peter Hammacher and moved out of state. Sometime in the 1890s Hammacher sold his farm to William Collins. The Collins farm became widely known as a dairy farm under the name Valley View Dairy.

There is one note of interest regarding his dairy business.  In 1915, Collins lodged a complaint with the Railroad Commission regarding the refusal of the Wisconsin Telephone Company to provide him with telephone service. The Mount Vernon Telephone Company that is connected with the Verona exchange had a line about 330 feet from Collins house.  The Wisconsin Telephone Company had a line about a half mile away from his house.  Collins stated that his son goes to Madison daily to sell milk and he has two daughters that live in Madison. Thus, almost all of his calls are to Madison which currently are toll calls that cost 15 cents per call of 2 minutes and 5 cents each additional minute. He makes almost no calls to Verona. The commission noting that Collin’s business and personal relations are in Madison and that no additional equipment would be needed to provide him service, ruled that the public convenience will be best served by extending the Wisconsin Telephone Company line to the Collin’s house.

In 1939, Collins sold his farm to Anthony Haen who was a real estate/property owner. The Haen family remained in the Nakoma area of Madison, WI.  Emil Koch who was hired by Haen to manage his farm moved to the farmhouse with his family for two years. The farm remained a dairy farm but horses were also bred.

In 1974, two brothers started Graber Manufacturing to make a roof rack system to carry bikes. This product, the Bike Porter rack was made in the reconditioned Matthews Hatchery. In 1989, Chris and Sara Fortune purchased Graber Manufacturing and rebranded it as Saris. A key milestone occurred when Saris released the first strap-on trunk rack in the market called the Adjust-A-Porter which sold for $26. In 1996, a new line was introduced called the Bones Rack. This rack could be mounted quickly to almost any vehicle and was stable and secure for up to 3 bikes. This system is the best-selling trunk bike rack in the world. 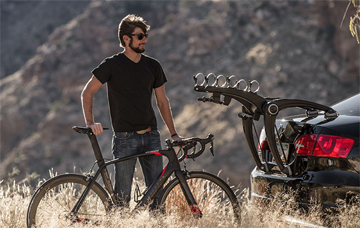 Saris Cycling Group has expanded to include CycleOps indoor bike trainers and PowerTap cycling power meters. The increased product line and added customers required them to add 18,375 additional square feet which became available in 2020. The original 160 year old house is still there and used for office space.