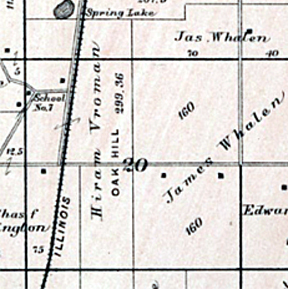 The Whalen/Barry and Lacy/Whalen/Barry centennial farms demonstrate the propensity of early settlers in the sparcely populated fronteer to intermarry. The Whalen/Barry property was settled in 1866 by James Barry, one of the sons of Garrett Barry (see 1873 plat map section 20). Through the years the Barry property varried in size and ownership (1861 and 1890 plat maps above top left and right maps, respectively, and 1911 and 1955 plat maps above lower maps left and right, respectively). The centennial farms were registered in 1992 (Whalen) and 1998 (Lacy) and for the most part are located in the East half of the SE quarter of section 20 (Whalen) and the west half of the SE quarter of section 20 (Lacy).

Mary Barry, the daughter of Michael Barry and granddaughter of Garrett Barry married James Whalen in 1864, providing the link between the Barry and Whalen families. An old aerial photograph of the Whalen centennial farm at 5823 Whalen Road shows the farm buildings (above lower left). The old farmhouse and barn can be identified in a recent satellite image (above lower right).

Kathryn Byrne, the daughter of Edward Byrne and granddaughter of James Barry, the son of Garrett Barry, provides the link between the Lacy and Barry family. An old aerial photograph of the Lacy centennial farm at 5897 Whalen Road shows the farm buildings (above left).  Some of the old farm buildings can be identified in a recent satellite image (above right).