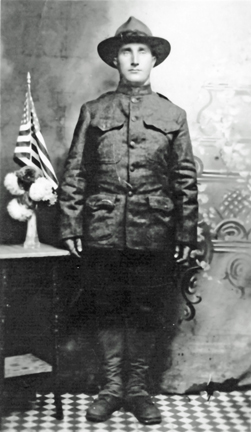 World War I started in 1914 but the United States resisted entering the war until April 6, 1917. Through volunteers and a draft the United States built a military force of about 4.7 million men with Wisconsin contributing nearly 120,000 men. However, Fitchburg being a small community of about 1100 people only contributed 6 men. The United States casualty rate of 2.5% (116,516) was much lower than the European armies and like the Civil War more American soldiers died of disease (54%, 63,114) than were killed in battle. All 6 Fitchburg men survived. It should be noted that many of the deaths were due to the flu pandemic, including many deaths in training camps in the United States.

The above link will bring up a pdf file containing a compilation of personal and military information obtained from a variety of sources including the Wisconsin Veterans Museum, the U.S. World War I Draft Registration Cards, 1917-1918, 1920 U.S. Census Records, military and personal documents from Ancestry.com, Find a Grave, and Order of Battle (Unit Structure) – American Forces – World War I, New River Notes.  The blue text in the pdf file has links to websites containing additional information.