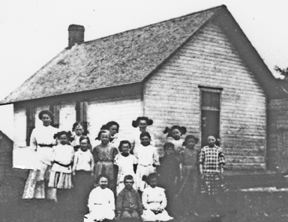 The District No. 10 school board was established in 1857 and like most of the other districts voted to collect taxes to pay $125 to build a school and $30 to pay a teacher for three months during the summer. The building was to be 20 by 26 feet square and be situated in the northwest corner of section 8 or as close as possible to that site. The 1861 plat map shows the school was on the southwest corner of section 5, just across the street from its proposed location.  In 1888, a proposal was made to build a new school but that proposal was defeated and instead a motion was made and approved to renovate the current building. A document from about 1910 lists the school as Summit School, District No. 10 and gives the names of the teacher, 17 students ages 6 to 14 (from the 1910 census) and the three school board members. This appears to be an appropriate name as the school was built on top of a hill. By 1922, the school was named District No. 10 Camp Badger. 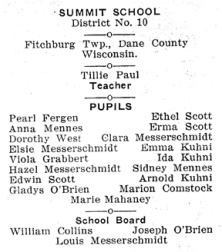 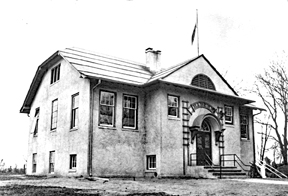 A new school made of brick and containing a basement was built in 1927 on the original site for $7,500. Like other Fitchburg schools, the state mandate to close one room schools resulted in District No. 10 being incorporated into the Oregon Area School District in 1964. The school was used for classrooms until 1975 when it was no longer needed and Fitchburg bought back the school. The building was rented out for parties, reunions and storage space. 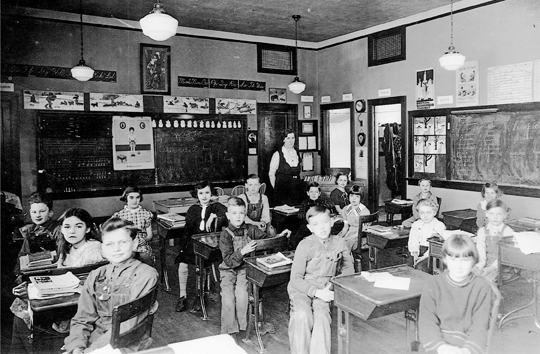 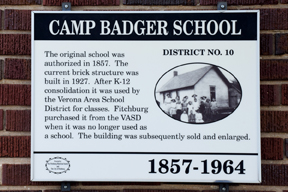 In 2001, the Fitchburg Historical Society in conjunction with the City of Fitchburg placed an historical marker at the former school building.