The Saga of Thomas Burke’s Gravestone by Eric Amlie 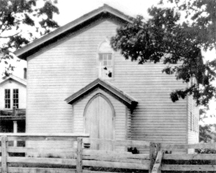 The old St. Mary’s Catholic Church in Fitchburg was built in 1857 just west of what is now the Correctional Center on County Highway M. Next to the church was a cemetery where most of the Catholics in the area were buried between 1857 and 1898. In 1885, the St. Mary’s congregation moved to Oregon a short distance to the south and closed the old cemetery in 1898. At this time a new St. Mary’s Cemetery was established next to the Protestant Prairie Mounds Cemetery in the northeast part of Oregon and most of the remains were reburied in the new cemetery or in a Madison cemetery.  This appears to be when Thomas Burke was separated from his old gravestone. 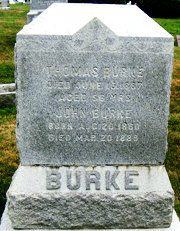 Fast forward to the mid 1990’s. The Fitchburg Historical Society board members became aware that the old Thomas Burke gravestone was located at an address near Rhinelander, WI. As I occasionally made trips to Rhinelander for my work, a co-worker and I stopped by to see the gravestone and figured the two of us could put it in the back of the station wagon. It quickly became apparent that the two of us were not strong enough to lift the gravestone. I made plans to return with better equipment and a trailer but as time passed the trip never happened.

A couple years ago, the FHS board was contacted by Stephanie Harvey who had the gravestone on her property near Clearwater Lake. Remembering my failed attempt 25 years ago, I was determined to make another attempt at retrieving the gravestone by myself using a 1000 lb. capacity dolly, a “come along” and a few other tools. I was sure I would be able to handle the gravestone and get it loaded into either my truck or a trailer.

Fortunately, as it turned out, my wife, Marge, decided that we should make an autumn vacation trip to Boulder Junction and while up there pick up the gravestone. On a rainy October 8, 2018, we headed over to retrieve the gravestone. We managed to get it on the dolly, but even with the two of us together we didn’t have enough weight to get the dolly tipped back so the weight was on the wheels. Working in the rain for the better part of an hour prying & blocking, we finally got the dolly tipped back. Once tipped back, it was not too hard to get it into the trailer, though I did have to use a “come along” to pull the dolly with the gravestone up a ramp and into the trailer.

Once we got it home, I contacted the Oregon Area Historical Society about the recovered gravestone as the Catholic church and new St. Mary’s Cemetery were in Oregon. They directed me to Our Lady of Consolation church in Oregon who in turn directed me to the Oakhill Correctional Institution who now is in charge of the old cemetery land. I told them of my plans to return the gravestone to the cemetery and they were supportive, even offering help if I needed it (I told them how heavy it is). 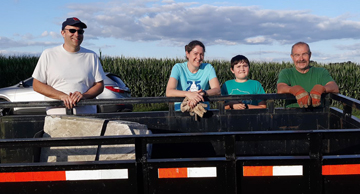 Someone expressed some concern about the stone tipping, as a couple of the old gravestones were tilted. To eliminate this concern, I decided to pour a concrete base for the gravestone. Unfortunately, the weather was getting too cold for concrete work so we kept the stone in our back yard through the winter. Spring was cool & rainy and then it turned very hot which kept delaying me from pouring the concrete base. Finally, during the week of July 22, 2019, we had a stretch of good working weather. I built a simple square form from 2 x 4s, excavated, mixed 3 bags of concrete and poured the base, making sure it was level and below ground level so the mowers would not hit it. 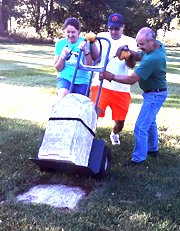 While doing some volunteer work with the Verona Area Historical Society at the old Dane County Asylum cemetery in Verona, I mentioned the project to the VAHS president Jesse Charles. He expressed interest in being there and helping me set the gravestone.

We let the concrete base cure for a week and then on the evening of July 30, 2019, Marge and I met Jesse, his wife, and his son at the cemetery and we set the stone. As Jesse is a big man, it was very helpful having him there to help handle the weight of the gravestone.

The old stone is finally back “home” again. 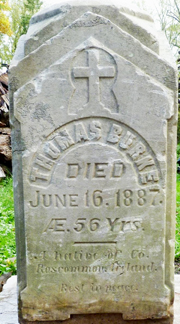